The Baltimore Museum of Art
Websites for Exhibitions, a Capital Campaign, and Annual Reports

The 2008 financial crisis was the worst economic disaster since the Great Depression of 1929. It occurred despite efforts by the Federal Reserve and the US Treasury to prevent the banking system from collapsing. For the Baltimore Museum of Art, 2008 was an unprecedented moment. The museum publicly launched its boldest philanthropic initiative in their 94-year history. In June, the BMA announced In a New Light: The Campaign for the Baltimore Museum of Art. The campaign set a $65 million goal and $40 million had been raised during the silent phase. The announcement elicited great excitement about Baltimore’s opportunity to ensure the BMA’s relevance and vibrancy for generations.

By Design Partners collaborated with the BMA’s marketing and development departments, and shared concerns that the museum insure their image of responsible stewardship during both the capital campaign and the economic crisis. As a result, the 2008 annual report was rescaled and designed to reflect the country’s current economic climate.

Part of the Baltimore Museum of Art’s vision is to be recognized as a vibrant institution that is embraced as an indispensable element of community life and a vital education resource for an expanding audience. In pursuit of this vision, By Design Partners designed subsequent annual reports for the BMA in an online (website) format. While other major museums were producing their annual reports in print and providing pdf versions to their online audiences, the BMA moved from print to a website format, which allowed the BMA to reach a global audience, further position the museum as an exciting cultural destination, a major contributor to the region’s vitality, and a leader among the nation’s premier art museums.

By Design Partner’s collaboration with the Baltimore Museum of Art includes websites for their Cézanne and American Modernism and Warhol: The Last Decade exhibitions, a redesign of the In a New Light capital campaign website, and online annual reports. 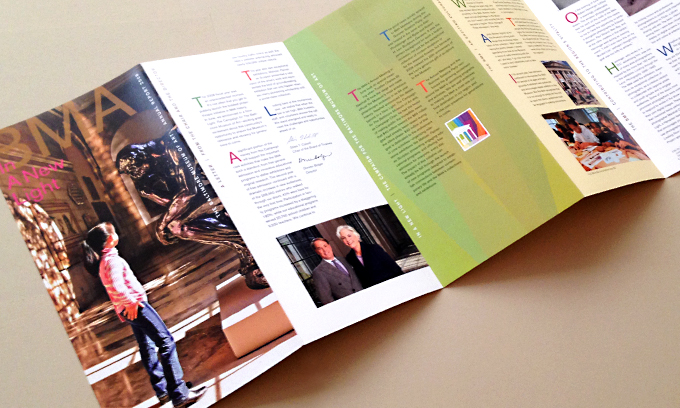 The 2008 annual report for the Baltimore Museum of Art — was designed as a six-panel brochure, which demonstrates the museum’s fiscal responsibility and commitment to good stewardship in a struggling economy. Subsequent annual reports were designed as online experiences, which eliminated printing and mailing expenses, and helped the Baltimore Museum of Art reach a global audience.