Pageantry Inc., is a nonprofit organization with a mission to promote drum and bugle corps and other related activities in the Great Bend and Barton County, Kansas area. It was established by alumni of the Argonne Rebels Drum and Bugle Corps and its Executive Director, Glenn Opie (1926 – 2013). Opie began his association with the corps in 1948. He served as a volunteer member of its board of directors and staff through 1973. Over the course of his twenty-five year association with the corps, Opie amassed an extensive archive of material documenting its history and legacy. In August of 2013, the archive was transferred to Pageantry Inc., and in September of 2013, its board of directors partnered with the Great Bend Public Library for an exhibit site as a part of the Smithsonian Institution’s “Museum on Main Street” program, sponsored by the Kansas Humanities Council.

The exhibit was originally conceived as a twelve-panel display. However, interest in it and financial support for it led to an expansion, and a total of 42 panels, including four display cases for ephemera, audio-visual components, four uniformed mannequins, and 36 championship flags. Produced by Pageantry Inc., and funded by the corps’ alumni and friends in conjunction with the Kansas Humanities Council “Hometown Teams” program, the exhibit, which opened June 1, 2015 was on display through August 31, 2015. At its dedication, the exhibit was presented to the community of Great Bend and Barton County, Kansas by Argonne Rebels Drum and Bugle Corps alumni, in recognition and appreciation of the communities thirty plus years’ support, and its sustaining effort to champion its youth.

The exhibition name was conceived to compliment the Kansas Humanities Council “Hometown Teams” concept. It reflects the idea of two teams: the corps on the field, and the community that made its success a reality. The latter was critical to alumni whose purpose of the exhibition was to express gratitude to the community of Great Bend and Barton County, Kansas. 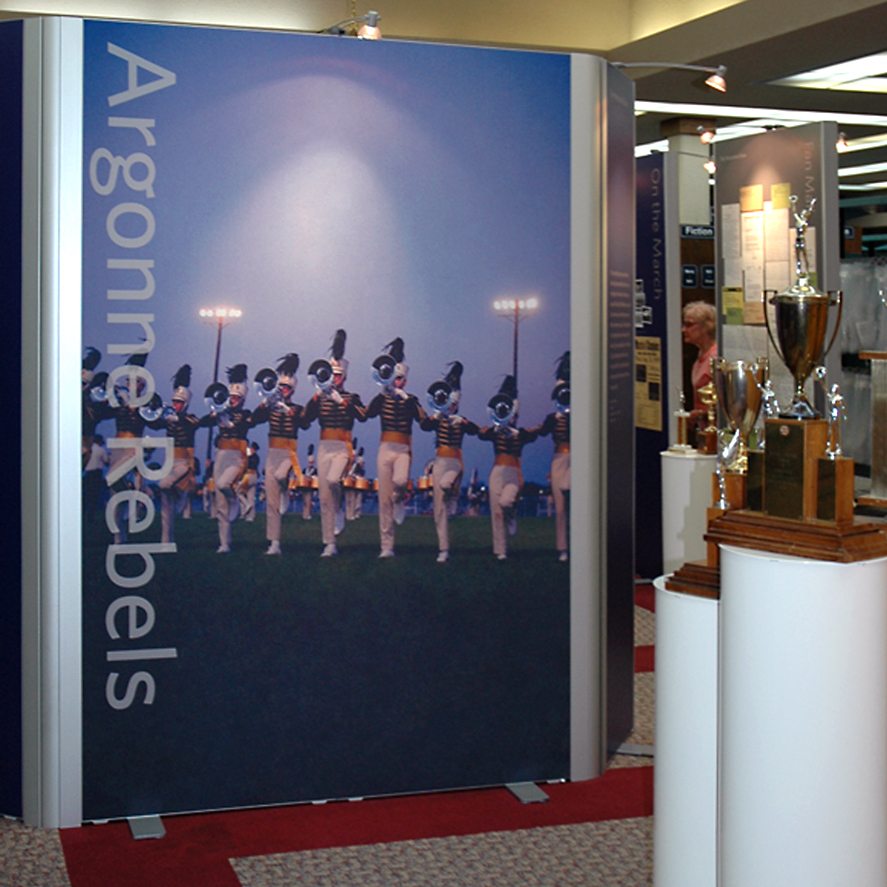 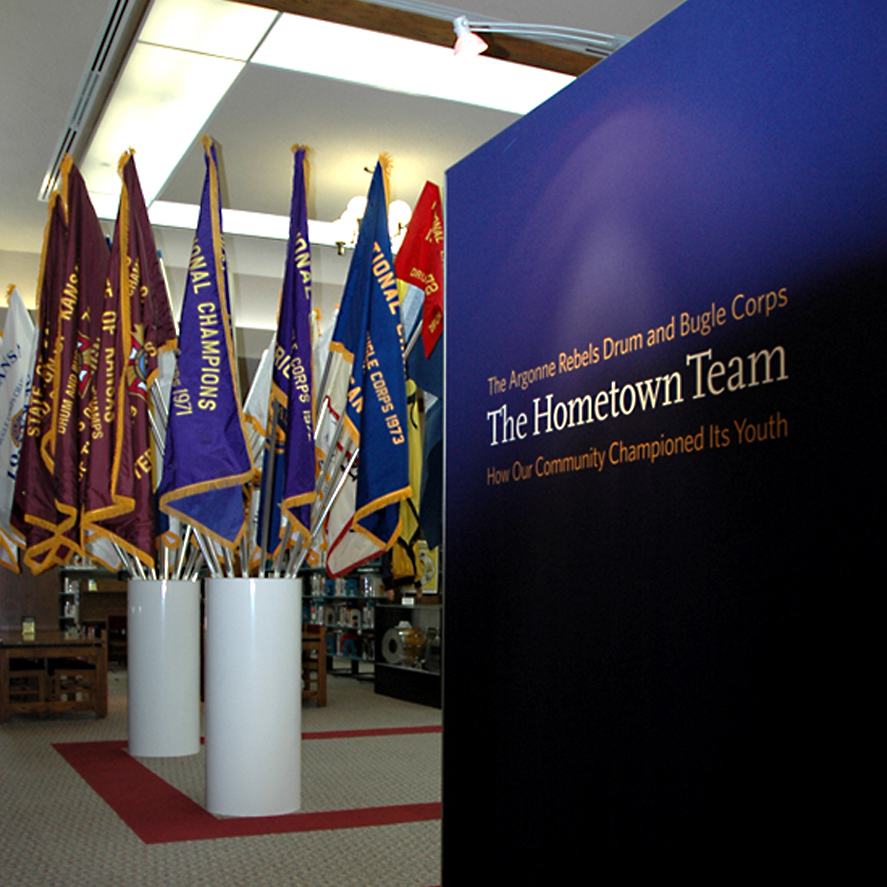 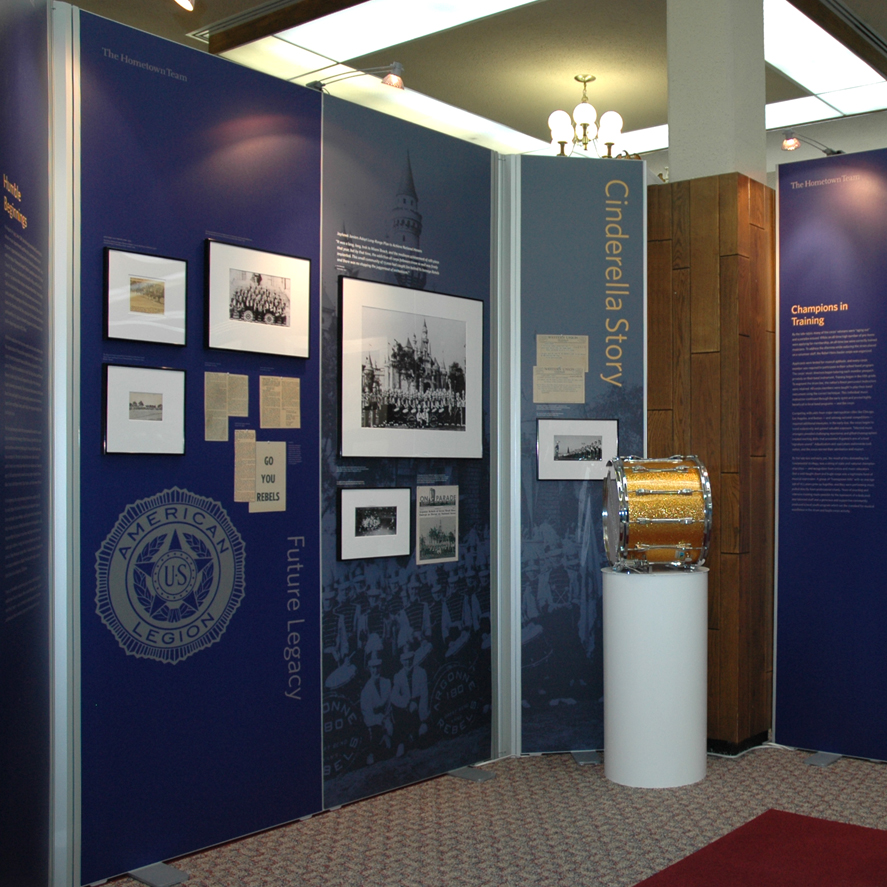 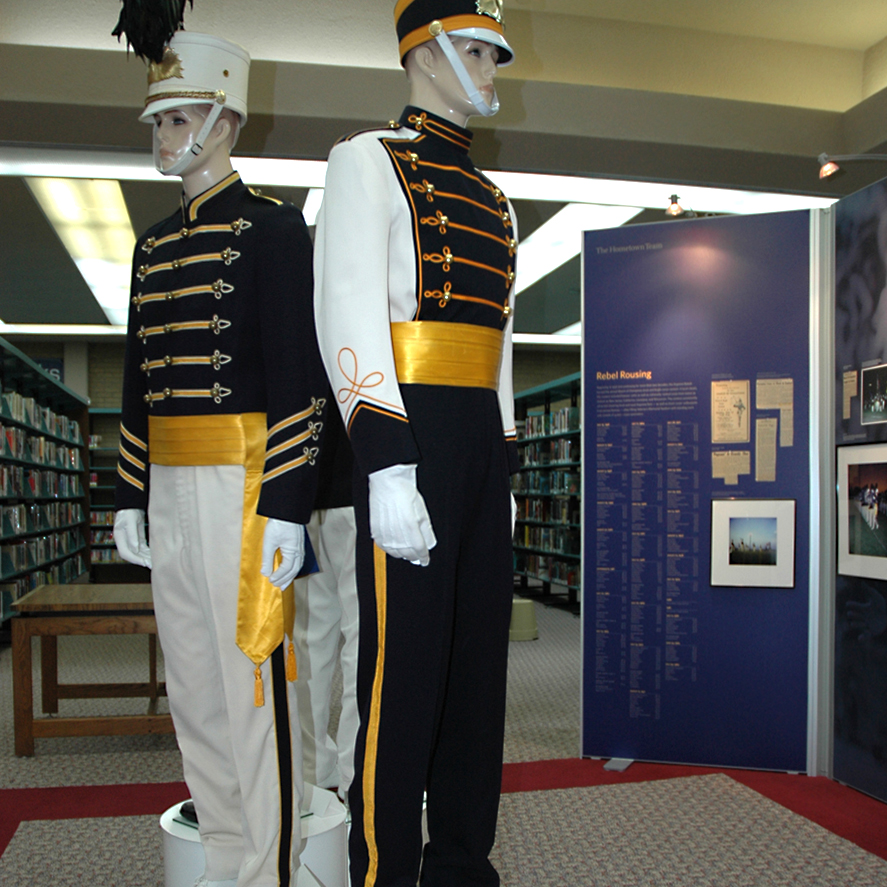 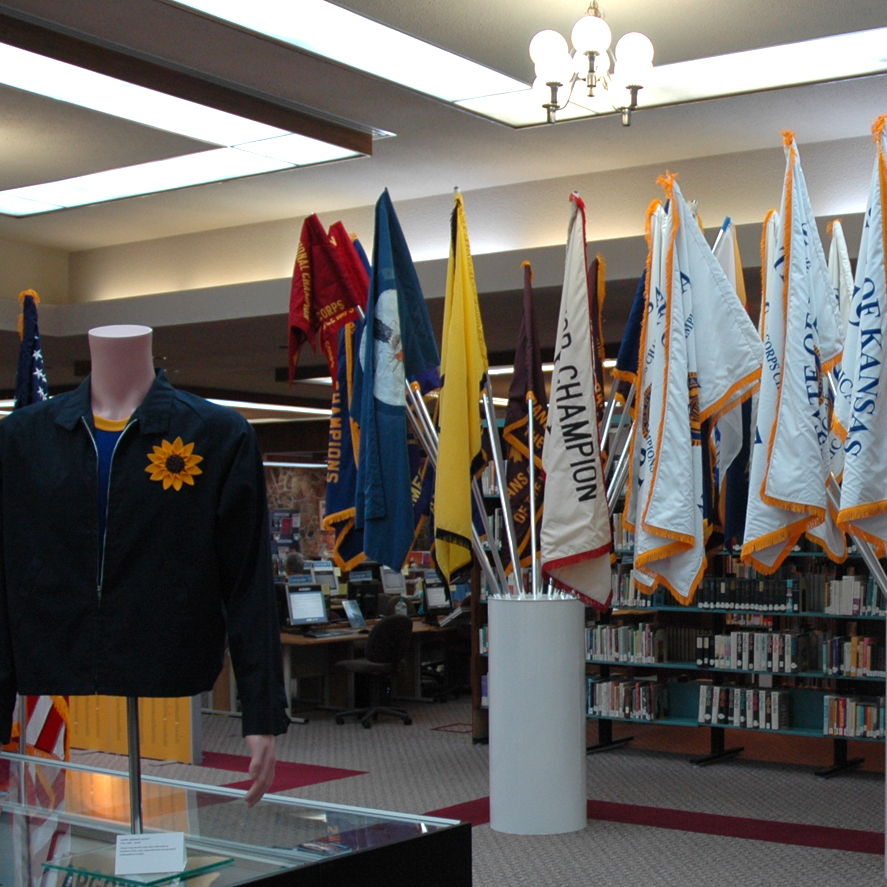 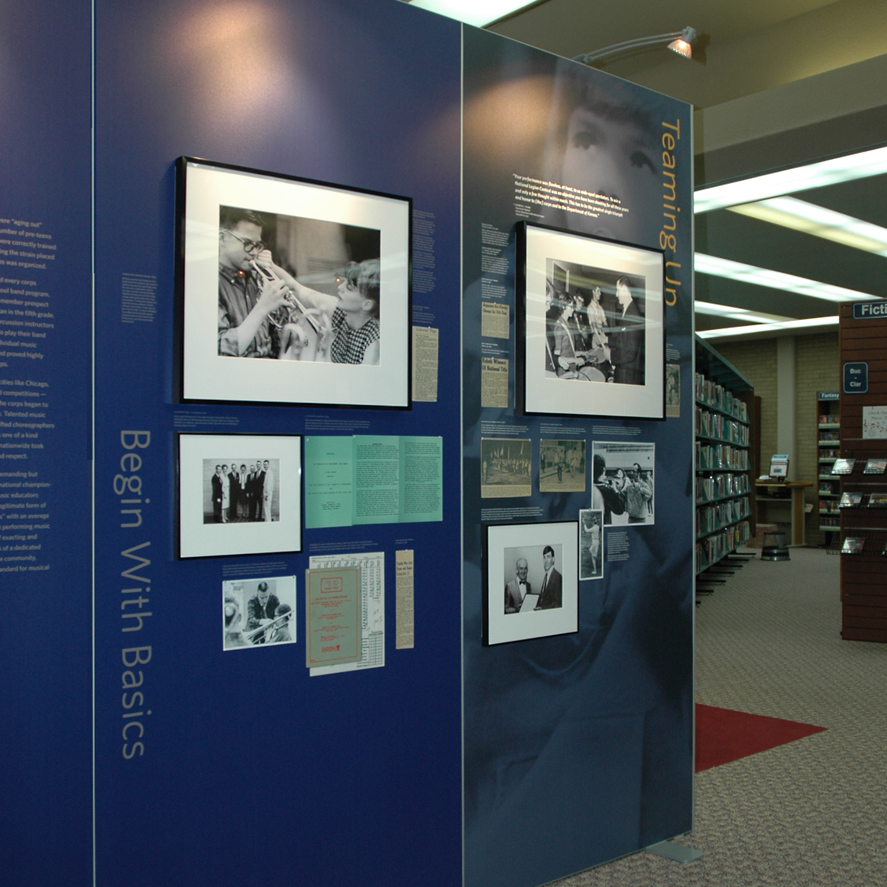 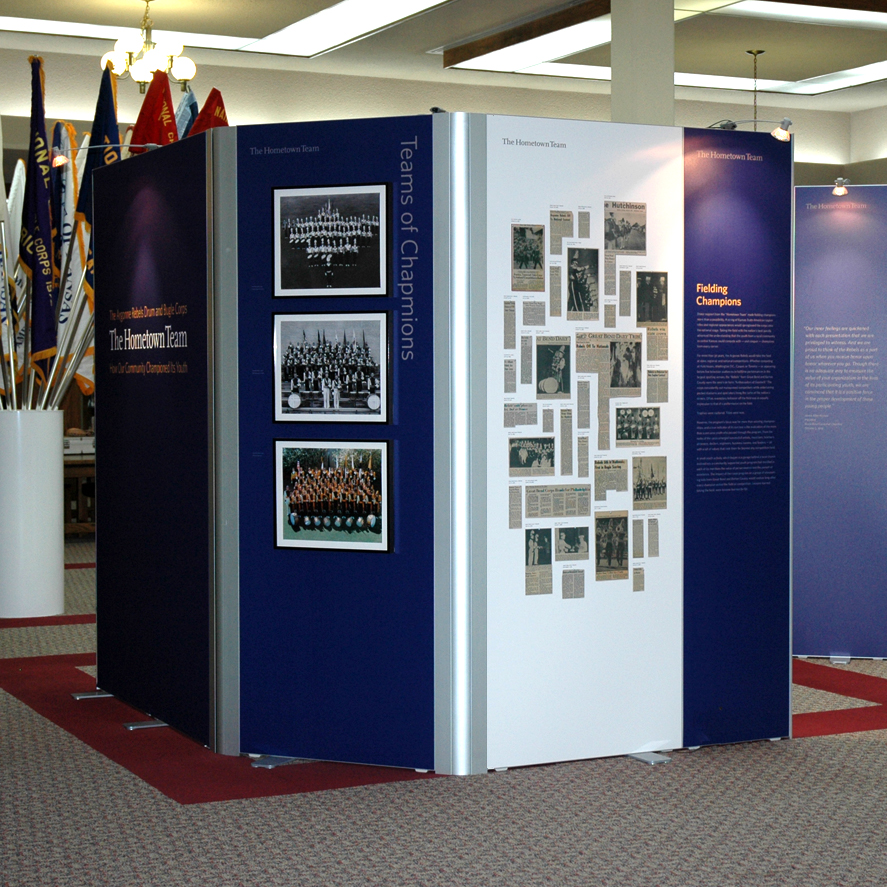 Two years in the making, the project began with research into countless files and an archive spanning more than three decades. What was uncovered, is the truly remarkable story of how a rural Kansas community of 20,000 championed its youth, through unprecedented local support.

Other Work for the Argonne Rebels

First introduced in 1970 to reward and score drum and bugle corps’ at the forefront of musical excellence, Content Analysis (CA) was a subcaption within the bugle caption and the first step in a paradigm shift that would drive the evolution of scoring performance in what would in the fall of 1971, become Drum Corps International. Created to keep up with game-changing corps’ performing sophisticated programs and increasingly difficult music, Content Analysis was worth five points and in 1971, awarded to the Argonne Rebels in eight drum and bugle corps’ competitions. By Design Partners created the 5.0 logo on this shirt for Argonne Rebels alumni. The shirt is worn to alumni events and drum and bugle corps’ competitions. It reminds long-time drum corps enthusiasts of Argonne’s legacy, and educates today’s audiences about the corps at the forefront of change that defined musical excellence in the activity that is today, Drum Corps International. 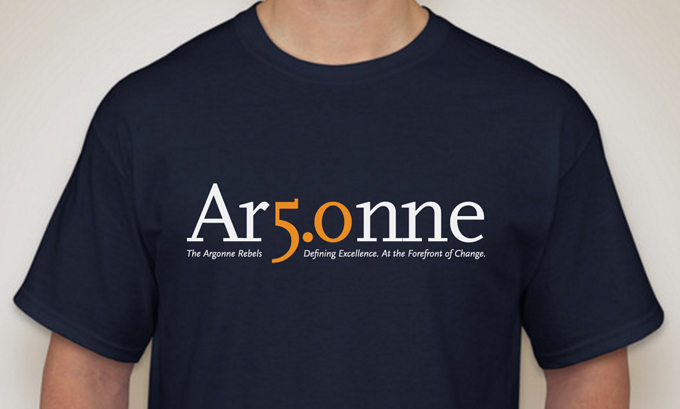 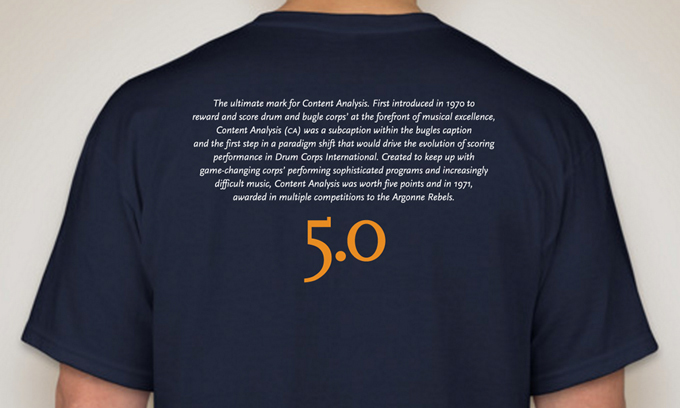